​            The Department of Tourism (DOT) and Emirates Airline on Wednesday inked a memorandum of agreement (MOA) that aims to assert the Philippines’ presence in the European, Middle East and other international markets being serviced by the Dubai-based airline.

​            Formalizing the agreement were Undersecretary Benito C. Bengzon, Jr. and Satish Sethi, Country Manager of Emirates -Philippines, after successfully concluding discussions that explored possible avenues to increase air connectivity between various parts of Europe and the Philippines via Dubai.

​            “The lifeblood of Philippine tourism is connectivity. We are an archipelago and most of the tourists can reach us only by air. That is why I consider initiatives like this as critical to the continuing development of our tourism market. We are opening more gateways and with it, wider access for visitors,” Tourism Secretary Bernadette Romulo-Puyat said in a statement.

​            Under the new partnership, the DOT and Emirates will jointly explore and implement various activities to promote tourism in the Philippines with the goal of boosting inbound arrivals in the country.

“Since launching our inaugural flight from Manila almost 30 years ago, we have been utilizing our broad network of global destinations to not only connect Filipinos to the world, but to also bring in more tourists to the Philippines so they can experience what this beautiful country has to offer. We are very honored to be working with the Department of Tourism in achieving its goal of 8.2 million tourist arrivals in 2019, and we remain as committed to contributing to the growth of the local tourism industry as we have been when we started operations here in 1990,” said Emirates’ Country Manager to the Philippines, Satish Sethi.

Joint marketing efforts will focus on branded advertising and promotional campaigns targeting Europe inbound traffic to the Philippines. The two parties will also utilize digital marketing strategies tapping into the different social media platforms and other e-marketing campaign initiatives to assert the Philippines’ presence in the international travel market.

Another focus of the partnership is the people-to-people exchanges, particularly to attract Europe-based consumers, trade and media agents by launching familiarization trips and tours in the Philippines. Under the agreement, both parties will also engage in joint roadshows, bringing together Philippine industry and key market trade partners, to boost opportunities for trade.

DOT Undersecretary Benito C. Bengzon, Jr. said that this agreement is a welcome development as the DOT works to improve air connectivity from long-haul countries in Europe and the Middle East, considering Emirates flies to more than 40 destinations in Europe and operates more than  250 flights per day globally. “It is widely known that long-haul source markets provide more benefits not only for tourism but also to hotel and resort operators, travel facilitators and other stakeholders as studies show that travelers from these markets stay longer and spend more,” he further explained the yields from this partnership.

Arrivals from Middle East, on the other hand, grew by an average of 3.96% per year for the last five years.

Emirates connects people and places around the globe, inspiring travel and facilitating trade across 158 destinations in 85 countries and territories. On-board its modern and efficient fleet of 269 aircraft, Emirates offers award-winning comfort and service, delivered by friendly cabin crew representing over 130 nationalities. Today, Emirates operates the world’s largest and one of the youngest fleets of the iconic A380 and popular Boeing 777s. In 2018, Emirates won the prestigious accolade of ‘Airline of the Year’ at the annual Air Transport Awards.

Emirates operates 18 weekly flights from Manila to Dubai, and daily flight to connecting Filipino travellers to Europe, the Middle East, Africa and Americas. Emirates also operates a daily circular service from Dubai to Cebu (CEB) to Clark (CRK) since 2016. All flights are served by Boeing 777-300ER aircraft, in two-class configurations, offering Business and Economy Class seats. 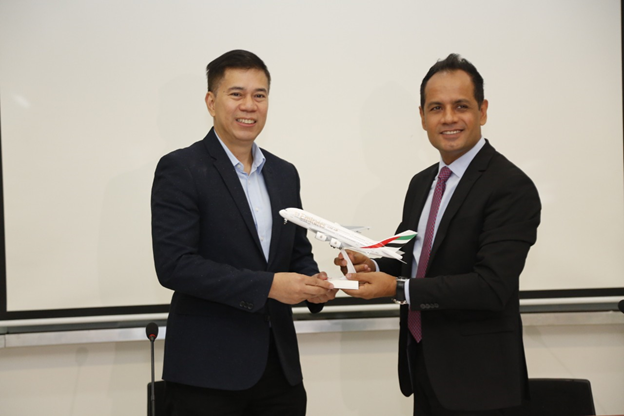 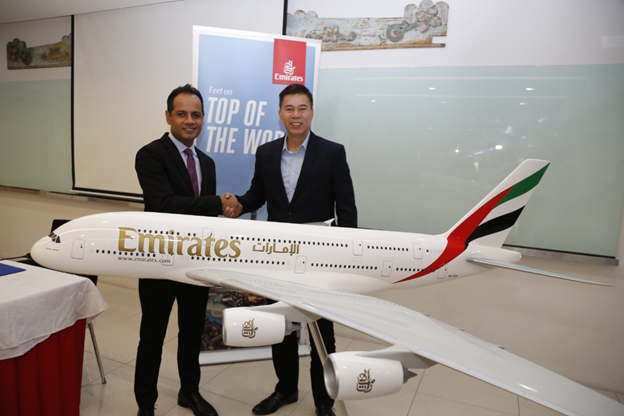 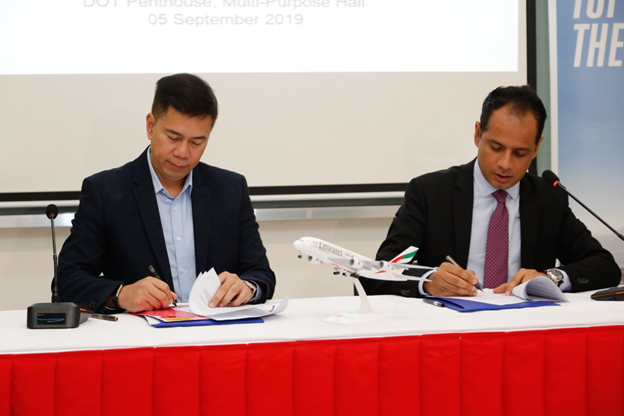 IN PHOTOS: Undersecretary Benito Bengzon, Jr. inks partnership with Emirates Airline on behalf of the Department of Tourism to boost PH tourism from EU, ME source markets.