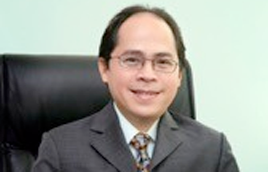 PDOT London is proud to announce that it welcomes it s new Tourism Attaché and Director for Northern and Southern Europe, Mr. Gerard “Gerry” Panga, a tourism marketing and product development specialist with over 20 years of solid industry experience.

He graduated with a B.S. Degree in Tourism from the University of the Philippines- Asian Institute of Tourism (1991). He was an accomplished student leader cited with a recognition award having served actively as the school’s Student Council Vice Chairman (1989), and Chairman (1990).

Gerry has also an MBA degree as a scholar of the Philippine Civil Service Commission (2003), and Masters in Tourism Specialization from the  School of International Tourism Sciences in Rome, Italy, sponsored by the World Tourism Organization (1998).

He worked previously as Group Tour Manager with the Manila Pavilion Hotel (Feb. 1993-April 1994) before moving to and staying with the national tourism government service in the last 21 years.

He first worked with the Philippine Convention & Visitors Corporation-Travel Trade Sales for 10 years with last assignment as OIC-Regional Manager handling Philippines/Europe/North America Markets (Sept. 1994-Feb. 2004), then transferred to the Department of Tourism (DOT) to serve as the Philippine Tourism Representative to Taiwan, and as Tourism Attaché to China for combined 11-year foreign service (Feb. 13, 2004-Feb. 12, 2015)

Gerry was recalled to the DOT Head Office in Makati on Feb. 13, 2015 and  was assigned to the Market Development Group -Route Development Program where he assisted in opening flight routes and expanding air access/seat capacities to the Philippines from all key source markets around the world. He was also appointed as the Secretary General of the Pacific Asia Travel Association – Philippines Chapter.

After 1 year of residency with the DOT Head Office, Gerry was recently appointed  to handle the Philippine Tourism Office in the United Kingdom which has jurisdiction over Northern and Southern Europe market cluster.

Gerry is married with three kids, and likes scuba diving, biking and other outdoor and adventure activities, and traveling with business and leisure travel experience to more than 20 countries and territories.