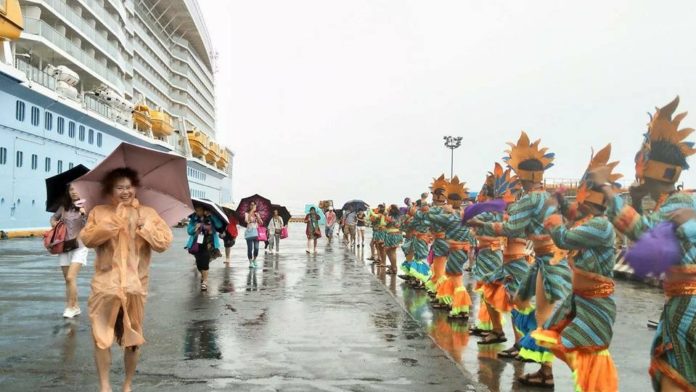 The Royal Caribbean’s MS Ovation of the Seas made its maiden call in Manila at Pier 15 South Harbor on June 9, after visiting Subic. The 169,000-ton ship,  considered a luxury category, carried some 4,700 passengers from Hong Kong for a 5-night ‘Best of the Philippines’ cruise. (Contributed photo)

By: Ma. Stella F. Arnaldo
Business Mirror
CRUISE arrivals in the Philippines have been unaffected by the six-month closure of Boracay Island, a major day-tour destination for passengers.
In an interview with the BusinessMirror, Department of Tourism Spokesman and Undersecretary for Tourism Development Planning Benito C. Bengzon Jr. said, “For 2018, we expect 190 cruise calls and 329,000 passengers. The growth has been quite phenomenal.”
In 2017 total cruise calls in the Philippines reached 140, with passengers at 195,751. This exceeded that year’s projection of 105 port calls with 117,000 passengers, by 63 percent. He said with Boracay closed until October 26, 2018, visiting cruise ships have been docking at Manila, Subic and Puerto Princesa.
“600 nautical miles is the ideal distance from the homeport to the next port of call outside it. Within the Philippines, cruise lines are looking for at least 200 to 300 nautical miles inter-port distances to form itineraries or multiple port calls,” he noted.
From June 6 to 11, the Royal Caribbean’s MS Ovation of the Seas made a port call in Subic and Manila, carrying 4,700 mostly Chinese passengers from Hong Kong. The passengers were taken on a “Best of the Philippines” tour, which included day trips to Las Casas de Acuzar in Bataan, Intramuros in Manila and Tagaytay.
The DOT is targeting visitor arrivals via cruises to reach 456,164 passengers with 402 port calls by 2022, the last year of President Duterte’s term of office, from 47,098 visitor arrivals via 56 port calls in 2016.
The popular Star Cruises has been home-porting in Manila since 2017. Last March, it returned, offering five night cruises between the Philippines, Japan, and Taiwan aboard the SuperStar Virgo until May 9. This month, it also offered a five-night cruise between Manila, Kaohsiung, and Hong Kong, as well as a two-night cruise between Manila and Keelung.
Manila was also included in last year’s itinerary of Dream Cruises, the luxury cruise line of Star Cruises’ parent, Genting Cruise Lines, bringing passengers from Manila to Boracay and Hong Kong for a three- to five-night cruise. There are no itineraries planned this year, however.
The establishment of a cruise port terminal in Manila is seen increasing the chances of the Philippines to be seen as a major cruise destination.
This developed as Sureste Properties Inc., led by business tycoon Enrique K. Razon, is seeking all the necessary approvals and clearances to establish the Solaire Cruise and Yachting Center (SCYC) in Parañaque City. Among the approvals needed are from the Philippine Ports Authority and concerned local government units, according to lawyer Joy Bulauitan, assistant COO of the Tourism Infrastructure and Enterprise Zone Authority (Tieza).
The infrastructure arm of the DOT, Tieza is the lead agency responsible for the construction and development of the cruise-dedicated port in Manila.
“Our initial evaluation is that the Solaire project is qualified under Tieza,” Bulauitan said. “They just need to complete their documentary requirements.”
Sureste is the property holding company of Bloomberry Resorts Corp. (BRC), also led by Razon. BRC is the developer of Solaire Resort and Casino.
Total cost of the proposed SCYC is $308 million (roughly P16.63 billion), and will be implemented within 2 years to 10 years, a Tieza news statement said.
The project was presented last May to President Duterte, who didn’t pose any objection as long as the proponent secures the necessary permits, Tieza said.
The proposal includes marine and terminal facilities, homeport and port-of-call operations; an expanded harbor offering dining, shopping, entertainment and maritime recreation; and walkable esplanades and plazas.
“The impact of the proposal is envisioned on four fronts. First, it aims to be a catalyst for economic development. Second, it plans to bring home Filipinos who are working in cruise tourism and accelerate development of seafarer training in the Philippines. Third, it hopes to reduce pressure on airports. Lastly, it aspires to develop a Philippines-centric cruise industry with a domestic itinerary,” Tieza said.
Sureste is expected to submit the cruise terminal project for Tieza’s approval as a tourism enterprise zone (TEZ). As a TEZ, Sureste will be able to avail itself of fiscal and nonfiscal incentives.
While Tieza had initially eyed the cruise port terminal as rising in a property within the Cultural Center of the Philippines complex, specifically, beside the Philippine Senate in Pasay, Bulauitan said she was informed the SCYC will be in the area of Solaire Resort in Parañaque.
Tieza has invited bidders for consultancy services on the feasibility study for the construction of the cruise port and terminal. The feasibility study is aimed at crafting a master plan for the cruise port project and its detailed engineering design requirements.
Source article:
https://businessmirror.com.ph/cruise-ship-arrivals-seen-bringing-329000-visitors-this-year/