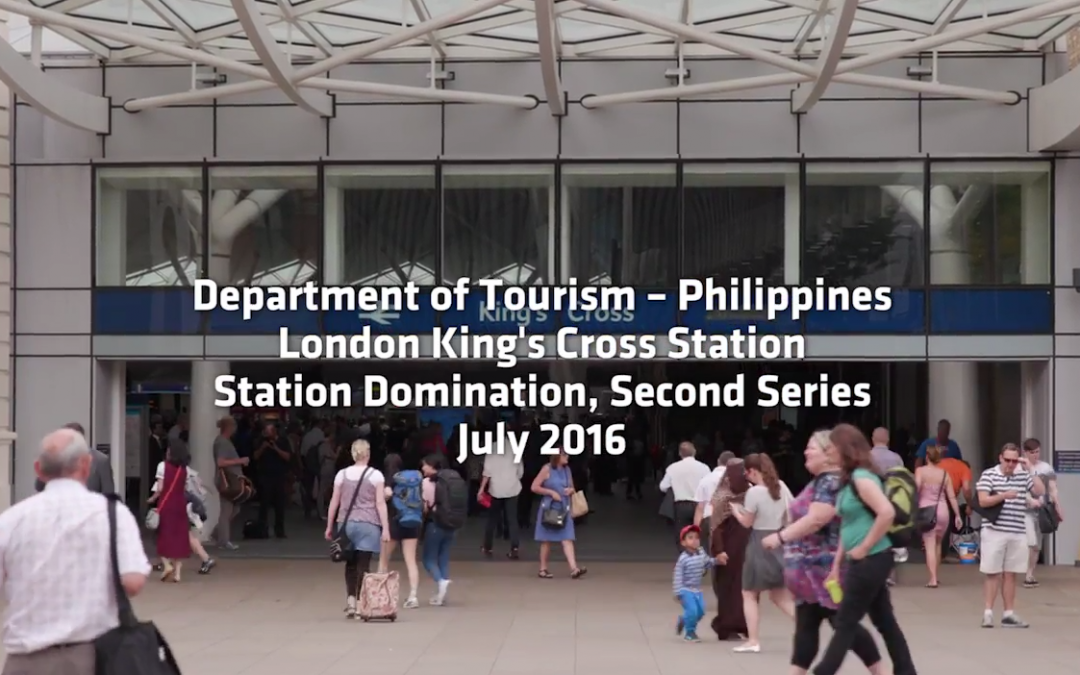 Last July 1st to July 28th 2016, London King’s Cross station was dominated by the Philippine Department of Tourism in collaboration with Round the World Experts.

As part of the Visit the Philippines Again 2016 campaign – and following the success of the recent London Waterloo station takeover – the Philippine Department of Tourism has launched its second station domination series at King’s Cross station. This event is out of a total of three station takeover projects, the final of which is to occur in November 2016 during World Travel Market.

Between the 20th and 24th July, a unique experiential zone was activated at the King’s Cross station where, once again, commuters were able to have a taste of what the Philippines has to offer.

As part of the partnership with PDOT, the Philippines as a destination was promoted throughout both Round the World Experts’ active networks during the campaign including their website and social media platforms, published newsletters and the “Experts” magazine of Flight Centre. Furthermore, the Philippines will also remain an “always on” destination on Flight Centre and Round the World Experts for additional marketing support until the end of the year.

During the King’s Cross domination project, consumers also had the opportunity to win a 9-day luxury holiday for two to the Philippines. The winners will initially stay at the exclusive five-star Conrad Manila Hotel followed by a selection of luxurious accommodations at two of the most beautiful island destinations, El Nido Resorts and The Lind Boracay. Patterned after Round the World Expert’s “Discover the Philippines” package, the prize also includes international return flights to the Philippines courtesy of Philippine Airlines as well as domestic return flights to Boracay by Flight Centre. Philippine Airlines, on its part, is supporting the campaign by offering special fares and international air tickets for more competitions as part of their 75th anniversary.

Consumers were able to enter the competition during the station domination project by taking a picture of themselves (or elements of the campaign) at the experiential zone at King’s Cross station and uploading it to social media with the hashtag #VPAholidaysUK. Alternatively, they were also given the option download Visit Philippines mobile app or simply enter via the official website.

The winner of the competition was announced on the 16th of August, and instant prizes were given daily during the Kings Cross takeover campaign.

“We had an amazing response from the Waterloo Station Domination with 8.4 million London commuters being exposed to the campaign, a Facebook user reach of over 1.2 million and over 50,000 engagements across various social media platforms during the seven days of experiential activity. The London Waterloo Station Domination video also went viral, resulting in over 9.5 million online views and 750,000 online engagements from around the world. As part of many other activities this year, we believe that by supporting our trade partners and doing something different we are really showing the consumers what The Philippines is all about,” says Gerard O. Panga, Tourism Attaché and Director for Northern and Southern Europe.

The next activity for PDOT London is the Philippine Tourism Weekend, which will happen on the 27th-28th of August at Potters Fields Park SE1 2AA. Exciting activities awaits such as Zip line, Beach Party, Street Food, Virtual Reality and much more. So come and join the fun and discover what Philippines has to offer! More information can be found here https://itsmorefuninthephilippines.co.uk/philippine-tourism-weekend/