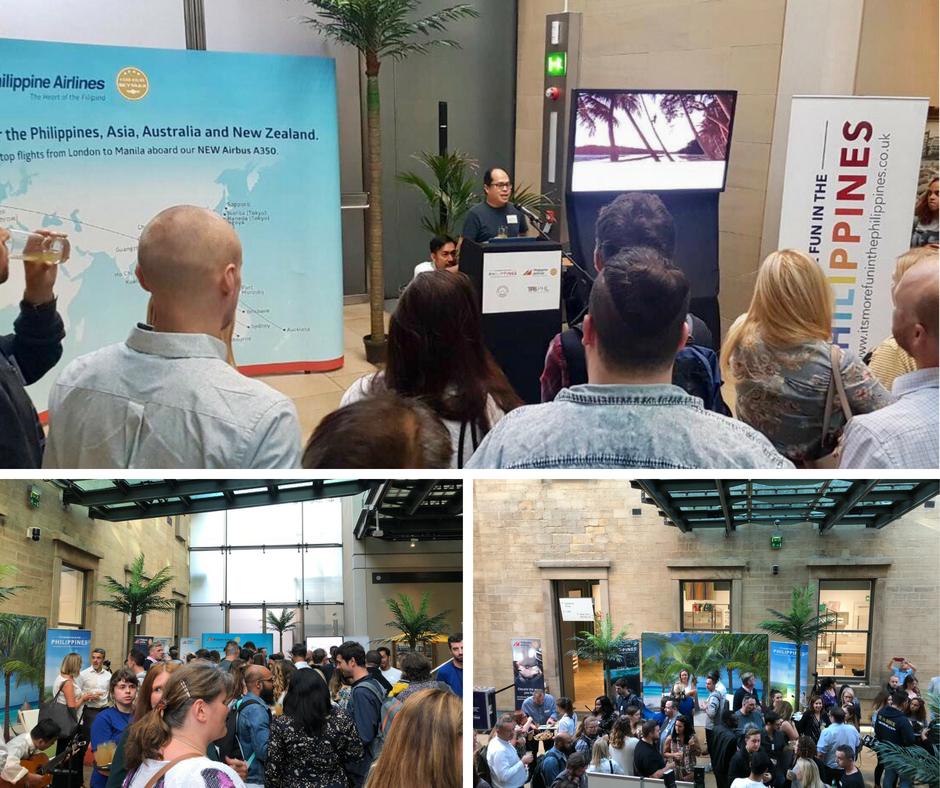 PDOT London, TPB and PAL welcomed over 80 travel agents from the leisure and travel corporate sectors at an evening event at the iconic city centre Manchester Art Gallery on 8th August 2018.

Mr. Gerry O. Panga, Tourism Attaché, PDOT London, presented the many new beautiful destinations in the Philippines to visit with an abundance of great value for money experiences. He highlighted the fact that tourism in the Philippines is flourishing with a record high visitor number from the UK. It’s expected that the growth will be sustained with further more Brits choosing to travel to the Philippines with the convenience onboard PAL’s new A350 Airbus aircraft flying daily non-stop from London’s Heathrow to NAIA Manila Airport, boasting enhanced services and seat flexibility. Mr Panga also added that Boracay Island will reopen at the end of October, this year, after the completion of its six-month rehabilitation programme. Palawan and other Philippine islands have meanwhile, experienced a surge in growth.

Carl Ellis,Marketing and Development, PAL presented the Philippine Airlines flights between London and Manila, with the introduction of the Airbus A350-900 from October. Its all-new design utilises the latest technology including a quieter cabin (with up to four times less noise). Full flat beds in Business Class, an all-new Premium Economy Class, mood lighting plus temperature and humidity controls to reduce jet-lag making for the most comfortable passenger experience to date.

David Cochrane, Country Manager UK Ireland at PAL said ‘Having been awarded a four-star rating from Skytrax in February, PAL has made numerous enhancements across the business both on the ground and in the air. We look forward to launching A350 service and appreciate the continued support from our agency partners.’

Emma Cashmore, Regional Director Sales – UK & Europe, Marco Polo Hotels & Resorts gave an introduction to the resorts and generously sponsored three nights at Marco Polo Manila and two nights at Marco Polo Cebu (including breakfast) as part of the major prizes of the evening’s  tombola of 2 return flight to Manila – London and consolation gifts from DOT. in which won by the travel agents guest.

The evening comprised of glimpses of Filipino traditions, culture, destinations and hospitality, featured performances from Gaga Lord and tasty delights of Filipino cuisine like Adobo, Pork Skewers, Fish Sisig accompanied by cocktails made from Don Papa, the No. 1 Filipino rum — as well as lots of give aways from DOT-London / TPB and PAL.