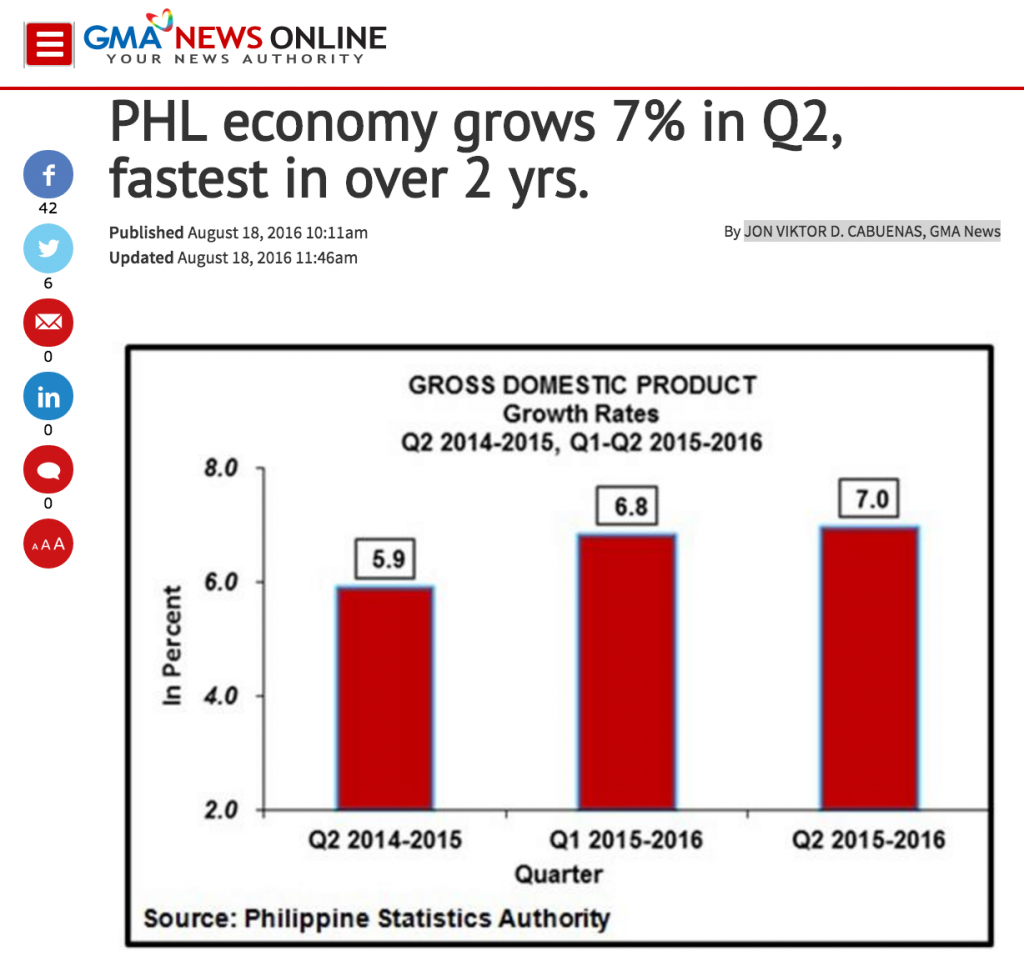 The Philippine economy grew by 7 percent in the second quarter of the year, the fastest pace in more than two years, the Philippine Statistics Authority (PSA) revealed on Thursday.

The second-quarter output was in line with the 6.5 to 7 percent forecasted by economists, and higher than the downward-revised 6.8 percent in the first three months of the year.

The Duterte administration has set a gross domestic product (GDP) target of 6.0 to 7.0 percent for 2016, revising the Aquino administration’s 6.8 to 7.8 percent target set in February.

The latest output numbers, as measured by the GDP, brought the first-half economic growth to 6.9 percent, from the upwardly-revised 5.5 percent in January to June of 2015.

The economy was able to ride on the momentum of the first three months of the year, Socioeconomic Planning Secretary Ernesto M. Pernia said.

“The high growth recorded for the first quarter of this year was driven by gains in the industry and services sectors,” he said.

“The 7-percent growth in the second quarter of 2016 is an excellent start for the current administration,” Pernia, who is also director general of the National Economic and Development Authority (NEDA), emphasized at a press conference in Davao City. 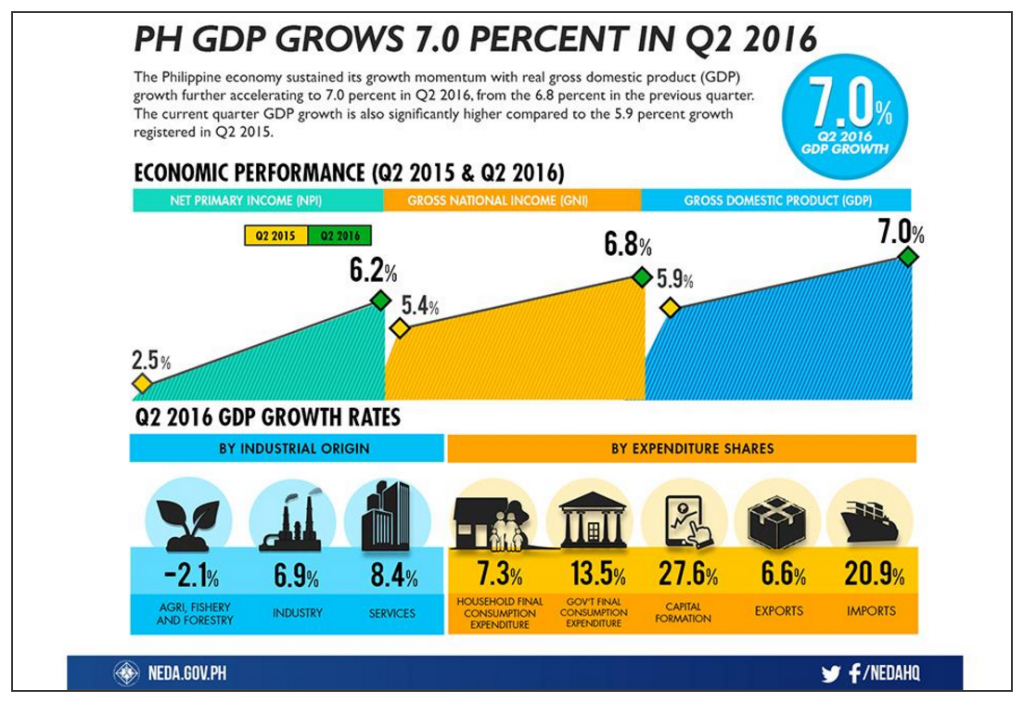 One of the best performers in Asia

The NEDA chief noted that the Philippines remains likely bested the top performers among emerging Asian economies, and probably the whole of Asia.

China grew by 6.7 percent in the second quarter, Vietnam by 5.6 percent, Indonesia by 5.2 percent, Malaysia by 4.0 percent, and Thailand by 3.5 percent, according to data released by NEDA.

“Data for India are not yet available but some forecasts put it above 7 percent,” Pernia said.

During the quarter, the services sector contributed 4.8 percent to total output and industry accounted for 2.3 percent.

“In contrast to the robust industry and services, the performance of the agriculture sector remains dismal at -2.1 percent due to the lingering effects of El Niño,” Pernia noted.

The strongest driver of the GDP growth came from investments which expanded by 5.7 percentage points.

The latest output numbers, as measured by the GDP, brought the first-half economic growth to 6.9 percent, from the upwardly-revised 5.5 percent in January to June of 2015.

Moving forward, Pernia said the first-half performance would help the government attain the lower-end of its GDP target.

“The economy will need to grow by at least 5.1 percent in the second half to attain at least the low-end of the growth target for the current year,” he said.

The Duterte administration has set a gross domestic product (GDP) target of 6.0 to 7.0 percent for 2016, revising the Aquino administration’s 6.8 to 7.8 percent goal set in February.

“What is important is that government continues the smooth transition of power and commits to its agenda of maintaining a consistent macroeconomic policy so that business and consumer confidence remain strong,” Pernia said.

The challenge remains to be inclusive growth, spreading the economic benefits to a wider segment of the population.

“Importantly, we must look at the sectors and geographic areas that have been lagging behind and determine how to improve their access to these opportunities,” Pernia said. — VDS, GMA News