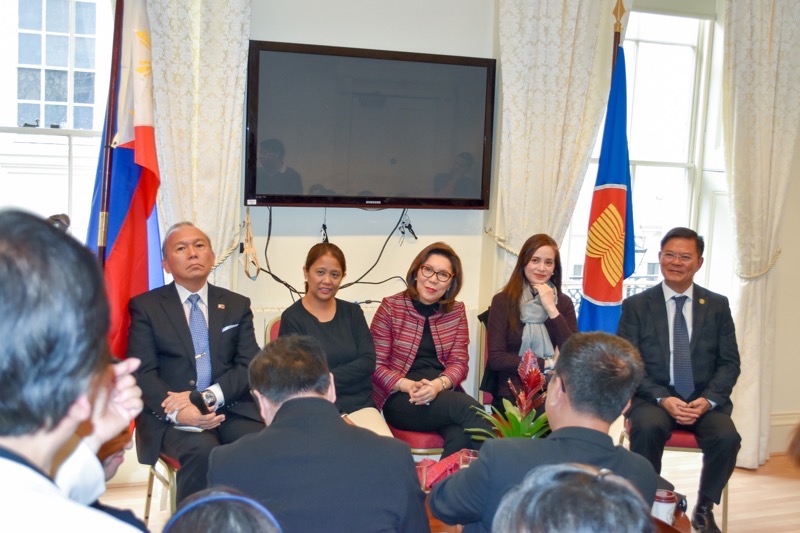 Teo directed the Department of Tourism (DOT) London office to launch a “special tourism promotion program” which will maximize the strong network of influence of our overseas Filipinos in UK.”

The DOT chief made the call as the guest of honor at the Kapihan sa Pasuguan hosted by Deputy Chief of Mission, Ambassador Gilbert Asuque, held at the Philippine Embassy in London.

“We’re also here to strengthen our ties with the Philippine Embassy and the attached agencies, and of course, with over 200,000-strong Filipino community in the UK,” Secretary Teo said.

“Many of your British colleagues, employers, friends and extended families have come to know more about the friendly and hospitable Filipino people, and the beauty of our country through your good representation here.  You could be our tourism frontliners, especially through word-of-mouth promotions and responsible use of social media,” the DOT official added.

During the open forum, Teo assured that the new tourism brand which launched during the Ms. Universe pageant early next year will be “better than the present one.”

Among the attendee lawmakers is Tourism Committee Chair and  Leyte Representative Lucy Torres, who said that  “We ought to improve on packaging and making the tourism experience memorable to make them want to come back again and again.”

Senator Nancy Binay who chairs the Senate Tourism Committee, for her part, emphasized that security and safety issues should not only be a concern of the police and military authorities but by all stakeholders, to be vigilant and prepared to address such incidents.