One of Asia’s hidden gems, the Philippines is an exotic archipelago boasting over 7,000 islands. With its untouched beaches, warm ocean waters that are rich with marine life and a laid-back island atmosphere, this country offers a beautiful getaway that evokes a flavour of an Asia of old. Experience Manila, the frenzied capital of the Philippines, which wins you over with its disjointed charm, or flee to more relaxing spots, such as the paradise beach island of Boracay. Picture perfect, the gorgeous powder-white sands of Boracay fade into the lapping ocean, creating glorious shades of turquoise and blue. Take a lazy stroll along the White Beach Path where motor vehicles are banned, and switch yourself to island mode. 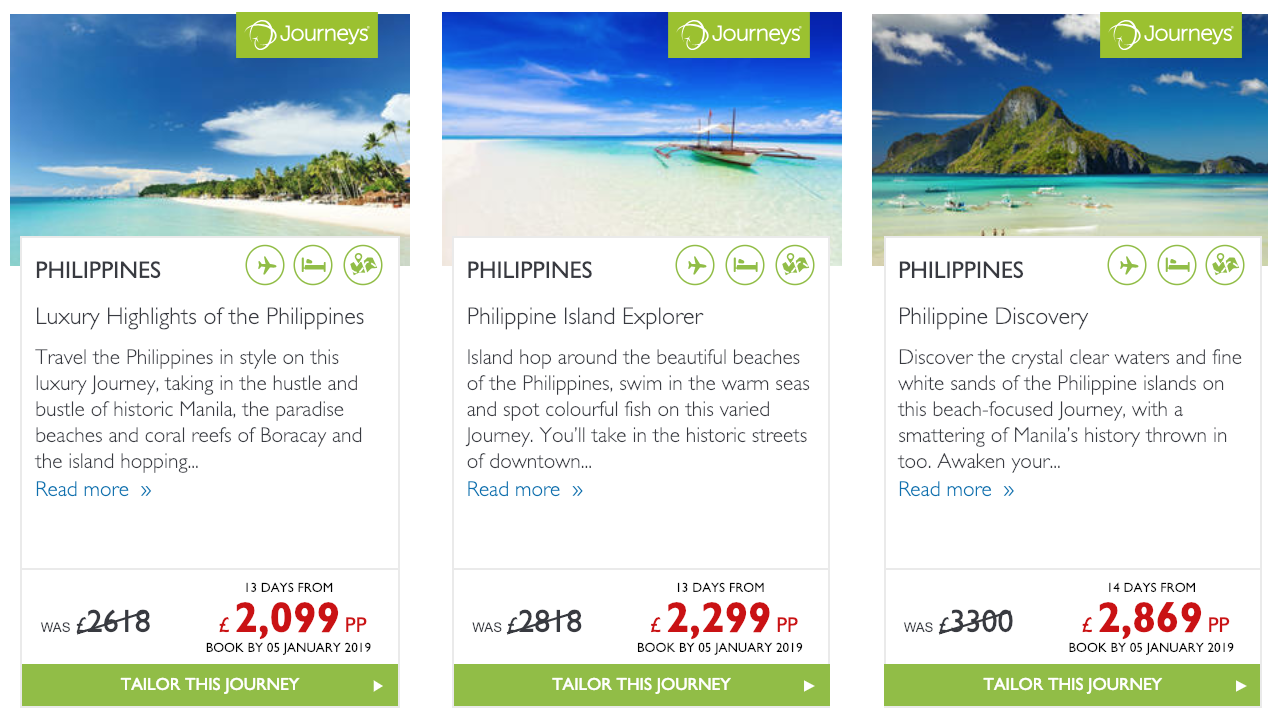 Enter a world of amazing adventures with Expedia

Whether you’re looking for natural wonders, fabulous beaches, exotic cuisine, cultural festivals, arts and crafts, recreation and entertainment, shopping, or all of the above, the islands of the Philippines are as close to a tropical idyll as you’ll find in Southeast Asia. In fact, three Philippines islands — Siargao, Boracay and Palawan — were recently voted as the 1st, 2nd and 3rd Best Islands in Asia by the Conde Nast 2018 Readers’ Choice awards!

Beaches in the Philippines are blessed with gentle coastlines, fine white sand and shallow azure water that make perfect conditions for swimming, diving and snorkelling, water activities and amazing adventures. With direct flights from London to Manila and great offers on hotels, don’t hesitate to make the Philippines your next dream holiday destination.

You may not be able to explore all of the 7,000 tropical islands of the Philippines, but there are some you just can’t miss. Cast away on the white beaches of Palawan, dive with whale sharks in crystal clear coral waters, roam through the colossal rice terraces of Banaue, scale active volcanoes, or paddle board through lush green rainforest; find your own way in the Philippines. 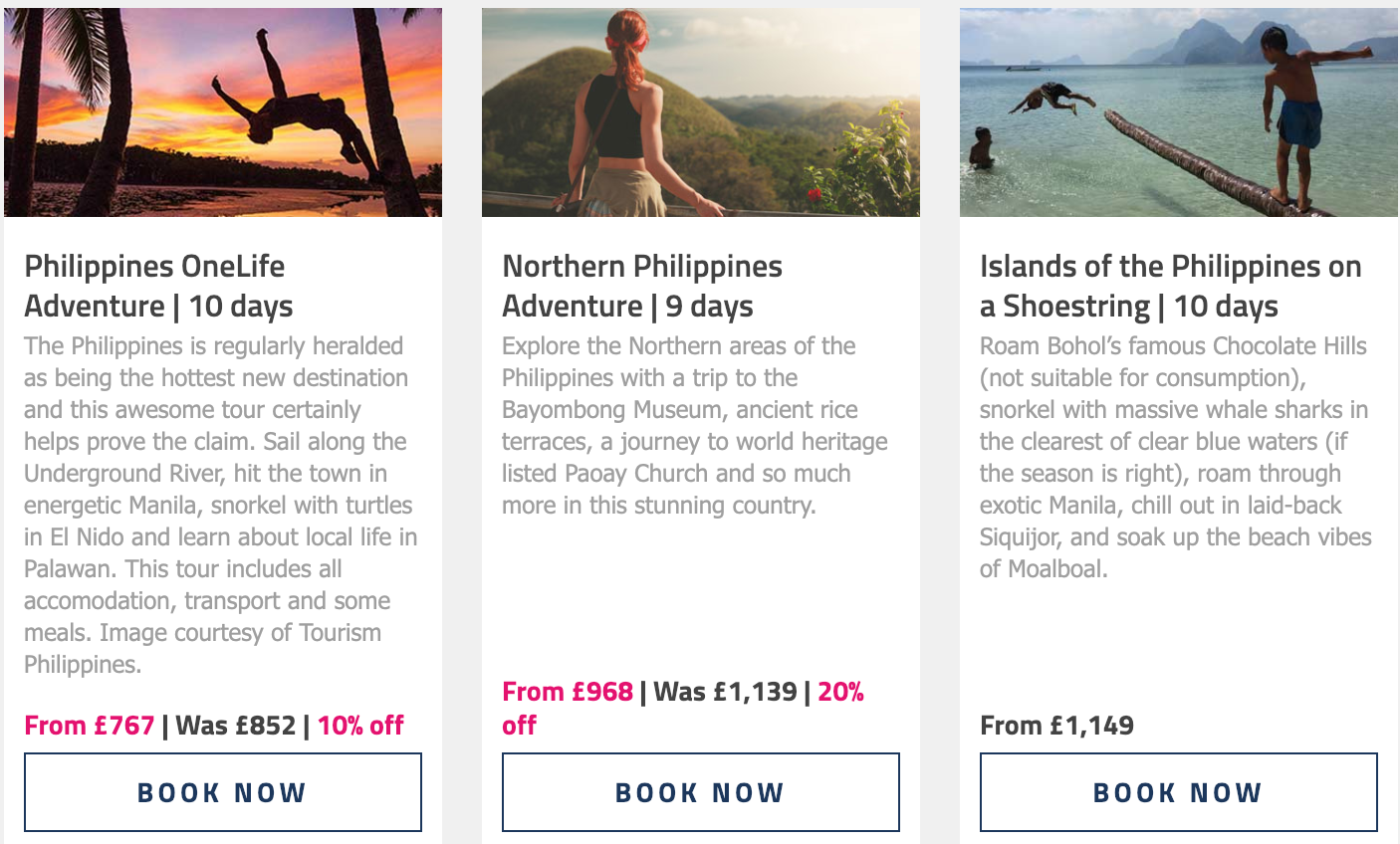 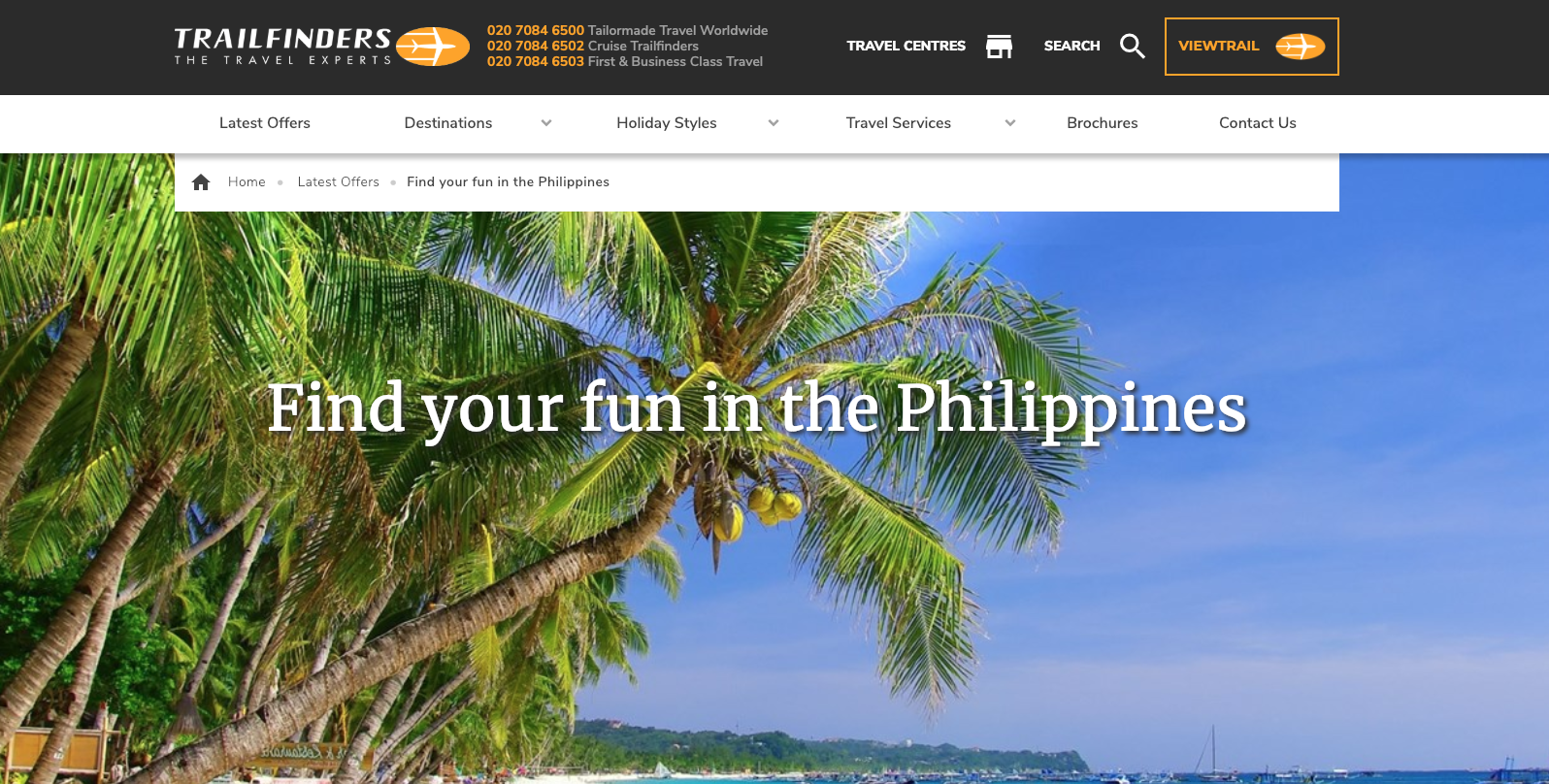 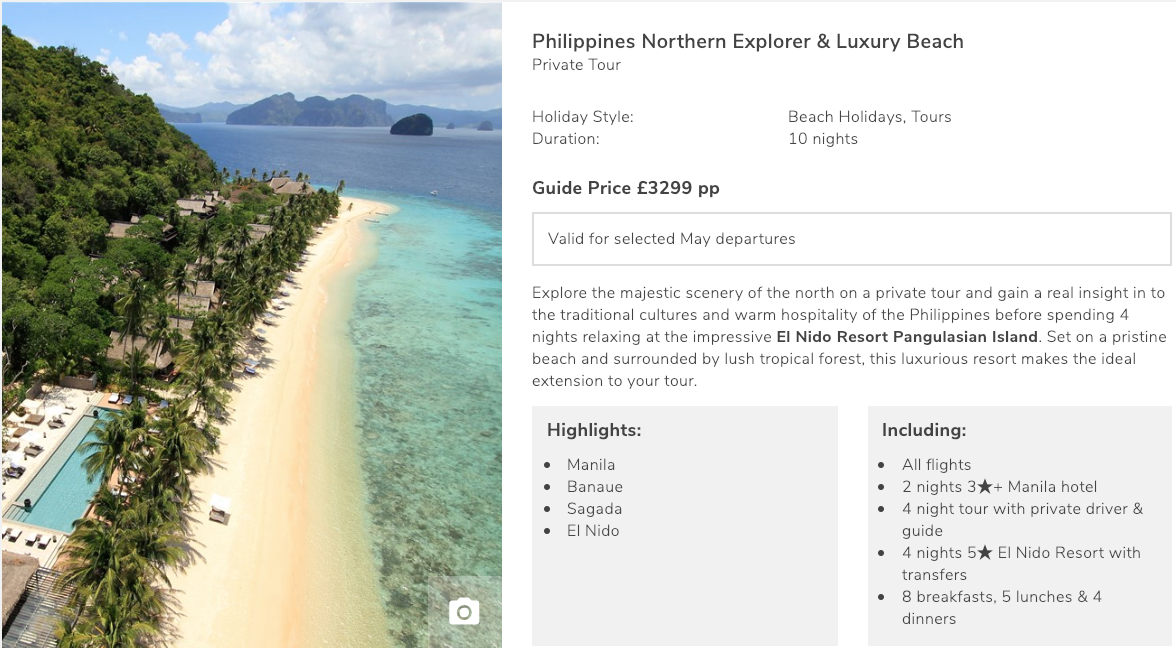 Trail Finders Find Your Fun in the Philippines

The Philippines, the world’s second largest archipelago, boasts miles of spectacular white sand beaches and offers a rich cultural identity and a fascinating history to rival any Asian destination.

From colourful towns filled with vibrant markets and ancient cathedrals, to lush tropical rainforests and a gorgeous coastline, this is a fascinating country full of surprises.

Whether you’re looking for a private tour to discover the majestic scenery of the north, a group tour to gain a real insight into the traditional cultures, or a relaxing holiday on one of the pristine beaches, Trailfinders expert consultants are on hand to help you plan your perfect holiday.

Culturally and geographically removed from the rest of Southeast Asia, this green archipelago is best known for its pristine beaches. But, moving inland, there are many other places to visit on your holiday in the Philippines, as our specialists have discovered from their exploratory trips there.

With more than 7,000 islands, it can be hard to decide what to see in the Philippines. You might take a few days in Manila to explore the capital’s heady mix of Asian, Spanish and Middle Eastern cultures. Continue south and you can visit the rumbling slopes of Taal Volcano or the emerald crater lakes of Luzon, while in the north you can discover the vast and ancient rice terraces of Banaue. And, reserving the end of your trip for the Philippines’ telltale white sands, you can enjoy world-class diving through the World War II wrecks off Coron or the bright corals of Malapascua. 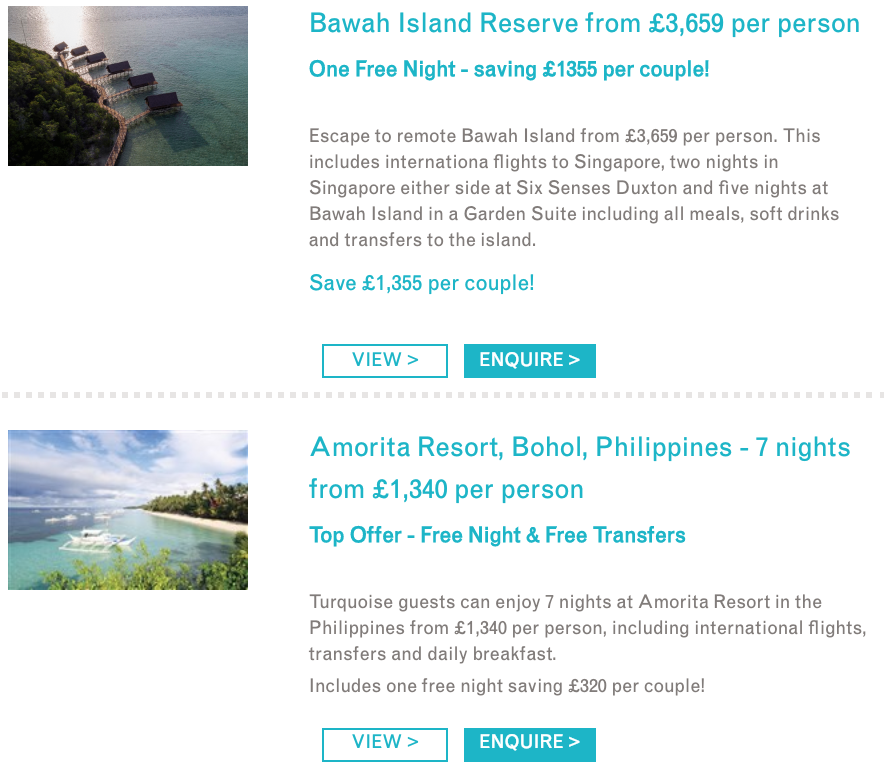 Turquoise Holidays to the Philippines

The Philippines is an intriguing country, much less on the tourist map compared with its popular neighbours of Thailand, Malaysia and Indonesia. The infrastructure is not as developed and therefore island-hopping is a bit more of a challenge but that is part of the appeal of this picture-perfect destination. This is untouched nature with breath-taking scenery, immaculate beaches – and with far less visitors you can enjoy it at its pristine, unadulterated best. Turquoise Holidays has unravelled the complexities of getting around the Philippines, sought out the most exquisite islands and sampled the best resorts to help you create the perfect, romantic escape.

Kayak Holidays to the Philippines

Holidays in the Philippines: Travelling in Manila

There are many flights to Manila International Airport which situated in the capital of the Philippines. Despite being a huge and diverse city, travelling around Manila is easy with its tram, metro, bus and taxi services. To get a distinct perspective of the city, you can ride a traditional horse drawn carriage in some districts such as Binondo, which is useful for navigating narrow streets. The Philippines has a very warm climate and the time zone is GMT+8.

Holidays in the Philippines: Things to see and do

In the centre of old Manila is Intramuros, a stone citadel founded by the Spanish in 1571 which is home to the cathedral. Nearby the stunning church of San Augustin is to be found, one of the oldest in the Philippines. A guided tour of the Malcanang Palace, the Presidential residence, is highly reccomended as is the National Museum on Roxas Boulevard.

Easily accessible from Manila is Fort Santiago on Corregidor Island, a site of colonial and military history where many Filipinos were imprisoned during the war. Today, there is a beautiful Japanese Peace Garden, Correigidor Lighthouse and the Malinta Tunnel military complex, now a fascinating museum. So whether you want to soak up the culture and history of Manila, or relax by the beautiful bay, holidays in the Philippines are bound to be an unforgettable experience. 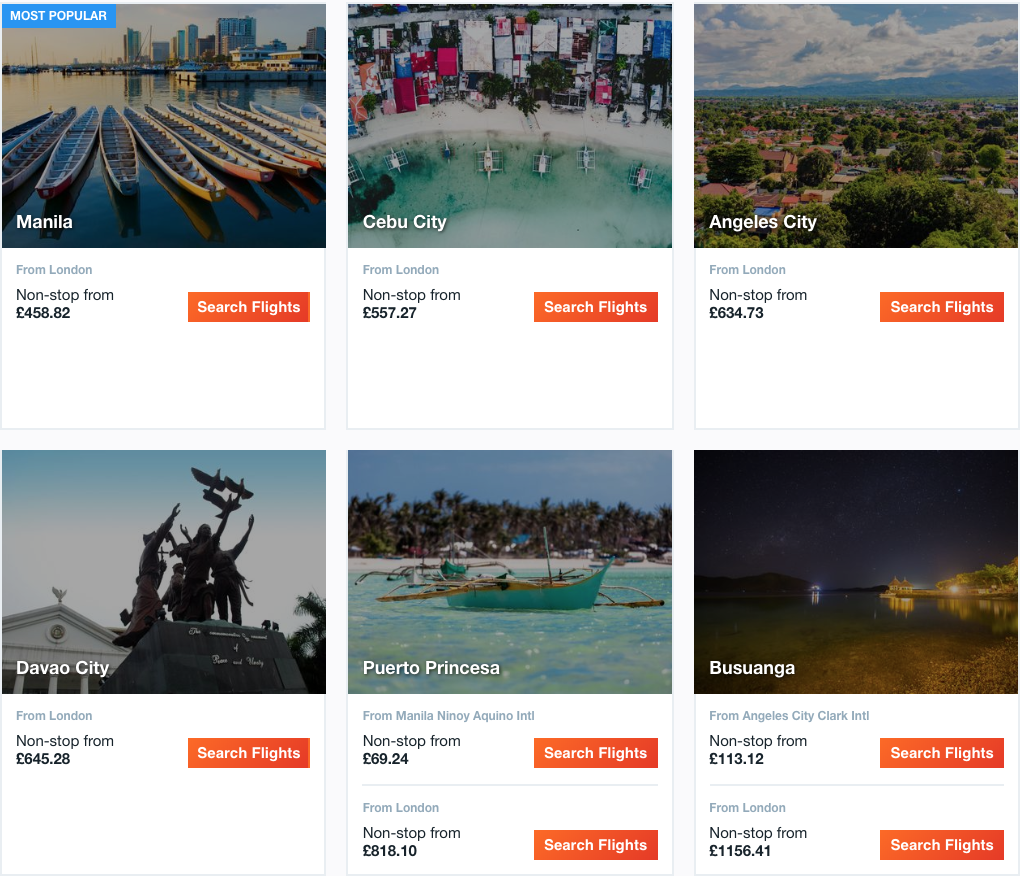